When Will The Hurricane Season Come Alive? 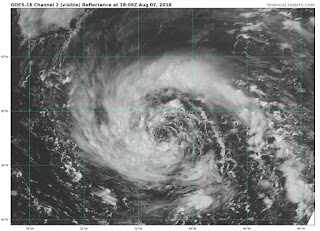 The Atlantic basin has been dead since the middle of July, but Subtropical Storm Debby has emerged in the Atlantic. Debby will be no threat to land, and barely even classifies as a tropical cyclone. So when will the Atlantic hurricane season truly start to ramp up?

Late August onward seems like a reasonable prediction, for a few reasons. Things have all of a sudden become more favorable in the Atlantic. First of all, SST's in the main development region (MDR) have been warming rapidly. Last time this happened, they dove back down again, but I don't think that will happen again, because Saharan dust is finally starting the clear out of the MDR.

I mentioned Saharan dust. The fact that it's clearing out of the MDR is a huge change for two reasons. Saharan dust can directly affect hurricanes, because dry air is one of the big things that stunts the development of hurricanes. It also can indirectly hurricanes, in the form of SST's. Here is my tweet about how Saharan dust (SAL) can affect SST's.

The MDR is starting to warm again, and may continue to warm, because the SAL seems to be clearing to the north. The SAL dries the air, which starts to evaporate ocean water faster to compensate, bringing cooler water to the surface. pic.twitter.com/FcsSsU1cu9
ñ NikeelTri (@DCAreaWx) August 6, 2018

Lastly, other than the southern Caribbean, wind shear really isn't that strong anywhere in the Atlantic, and shouldn't be too big of an issue overall unless the El Niño starts to really get going. Atmospheric conditions still aren't looking good for El Niño conditions quite yet, so it shouldn't play much of a role until later down the road.

The ECMWF model suggests that these favorable conditions should start in North Africa around mid to late August, but won't reach the Atlantic basin until early September. So strong, moist African waves should enter the Atlantic in the next week or two and could develop, but things shouldn't really get going until September comes around.

The basin is finally forecast to have more favorable conditions for tropical cyclone genesis as we head into mid-September, a little over 1 month away. pic.twitter.com/D7TPAIpc51
ñ Ben Noll (@BenNollWeather) August 6, 2018

With this in mind, late August seems to be the most likely time for the Atlantic to ramp up in tropical activity, but don't just assume the Atlantic will be dead until then. Make sure to check the NHC website for any possible storms, because tropical cyclones can form anytime, even if things aren't particularly favorable. Stay tuned to this blog as we head into the peak of the hurricane season.