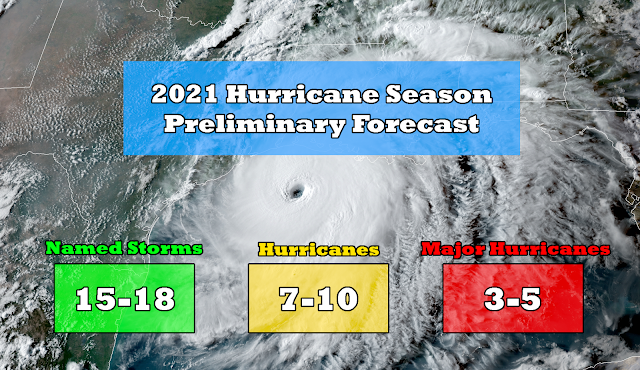 The 2020 hurricane season was record-breaking in many ways. The records for number of named storms, US landfalls, and rapidly intensifying systems were all tied or broken. Arguably the most impressive stat was the fact that we had a Category 4 and a Category 5 hurricane (Eta and Iota respectively) form in the month of November.
It feels like we just finished wrapping up the endless 2020 hurricane season, but the 2021 hurricane season is already on our doorstep. It's unlikely that we repeat the unprecedented amount of activity that we saw in 2020, but that doesn't mean that the season won't be active. While the season begins in less than 40 days, peak season is several months away, and as usual, there's quite a bit of uncertainty as to how active it will be. In order to get a sense of what may be in store, I'll be discussing how the ENSO, VP anomalies, and Atlantic SST anomalies may evolve over the coming months.

The El Niño Southern Oscillation (ENSO) is one of the most useful features to look at when forecasting the Atlantic Hurricane Season at this range. Unfortunately, the ENSO also happens to be rather difficult to predict during the Spring. What we do know is that we are coming off a moderate La Niña from the past winter. This La Niña has been steadily weakening over the past few months, however, and we are expected to enter ENSO neutral territory soon.
At this point in time, it seems relatively likely that we'll remain in an ENSO neutral state through most of the hurricane season, thanks to the fact that La Niña forcing in the atmosphere is deteriorating and the oceanic cold pool is no longer being reinforced. It is possible that the La Niña tries to make a comeback during hurricane season, but it's unlikely that an El Niño develops. This is thanks to the existence of the African Standing Wave (ASW) and Indian Ocean Standing Wave (IO standing wave). 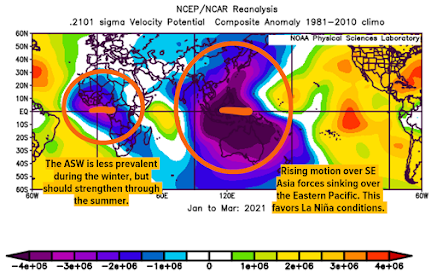 Since the turn of the century, the ASW has emerged almost every summer. It's essentially an area of anomalous rising motion in the atmosphere. It tends to cause a more active than usual West African Monsoon (WAM). When coupled with the IO standing wave (as it is now), it tends to favor La Niña conditions atmospherically as it enforces the western side of the Walker Circulation.

What I'm getting at here is that an El Niño is unlikely to develop. El Niño's tend to produce unfavorable conditions over the Atlantic, leading to below-average hurricane activity. If an El Niño is not present, the likelihood of an above-average hurricane season significantly increases, even if we're in an ENSO neutral state rather than a La Niña. The African/IO standing waves will make the development of an El Niño unlikely, which is a large reason why I'm forecasting above-average activity.

Let's shift over to the Atlantic Basin itself. When considering whether or not a season will be active, sea surface temperatures (SSTs) in the Main Development Region (MDR) are very important. The higher these SSTs are, the more fuel a tropical cyclone has to work with. SST's in the MDR are near average at the moment. At this time of year, however, MDR SSTs aren't as important as they would be during peak hurricane season, because there is plenty of time for SST anomalies to change.
As shown in the graphic above, SST anomalies in the Canary Current at this time of year have a rather high correlation to Atlantic hurricane activity. This is because the water from here flows into the MDR over time, so the warmer it is, the warmer the MDR will be in the future. For a variety of reasons that I will not discuss in this forecast, SSTs in the Canary Current are well above average. This indicates that the MDR will likely warm quite a bit over the coming months, which would favor an above-average hurricane season.
One potential inhibitor for the hurricane season is the well above average SST's in the subtropical Atlantic (aside from the Canary Current). If this persists through peak season, it could potentially displace instability away from the MDR, making the MDR less favorable for tropical cyclone genesis (TCG). While this would make the subtropics a more favorable place for TCG, it would be a detriment to the season overall. 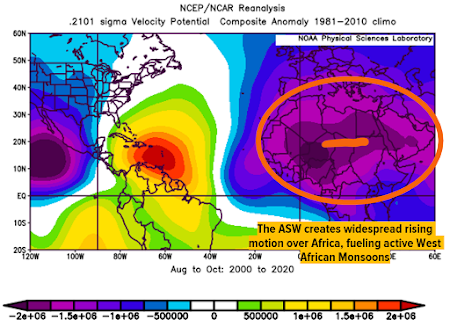 One last thing I'd like to discuss is the West African Monsoon (WAM). The WAM produces tropical waves, which tend to be the seeds for our long-lasting, powerful hurricanes. As I mentioned earlier, the ASW favors an above-average WAM, which usually leads to strong tropical waves coming off Africa more frequently.
Something to note is that when the WAM is extremely powerful, it can actually inhibit the development of tropical cyclones in the MDR. This is exactly what we saw in 2020, and is the reason why we saw surprisingly little MDR activity despite the fact that the season was so active overall. While it's unlikely that the WAM gets to the intensity that it did in 2020, this is something to monitor over the coming months. 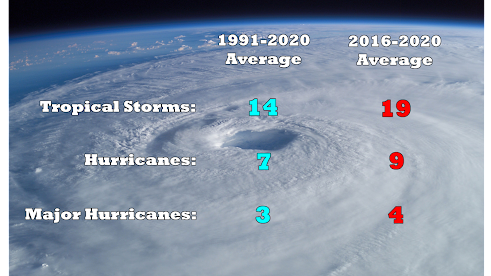 Now that I've discussed the various features that I looked at while coming up with this forecast, it's easy to see why I'm predicting above-average activity for the upcoming hurricane season. As has been in the case for the past 5 years, a favorable ENSO state, above-average MDR SSTs, and an active WAM all look to be in play for the 2021 hurricane season. It's difficult to look into specific, subseasonal factors at this point as we're still months away from peak hurricane season, but the overall picture is simple; expect yet another active hurricane season.