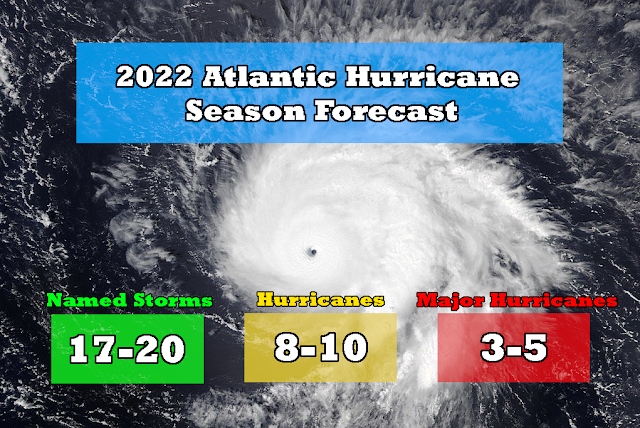 May has arrived in full force. No, the birds are not chirping and the sun is not shining. It's 50 degrees and raining, and I'm once again questioning why I live in the DC area. 2022 has passed by quickly, and we're just one week from when the NHC begins to regularly issue tropical weather outlooks. With that in mind, it's time to take our first look at the upcoming hurricane season. 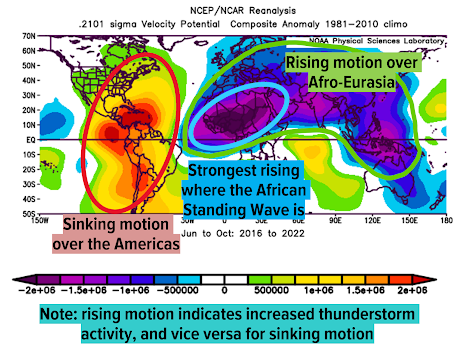 Before I get into the details, I just want to note how consistent our large-scale pattern has been over the past several years. Rising motion has dominated Africa and the Indian Ocean while sinking motion has taken hold of the Pacific. This year really looks to be no different. That information alone essentially forces me to forecast an active hurricane season. Six active years in a row is already unprecedented, but with the favorable look we're seeing this year, I think that we're going to add a seventh.

I'm going to give a brief overview of the large-scale factors that are playing into my active forecast, but this setup has occurred so frequently in recent years that I won't talk about them in great detail. What I'm more interested in is the degree of activity that we see, which is probably going to be heavily influenced by the sea surface temperature anomaly configuration in the Atlantic. 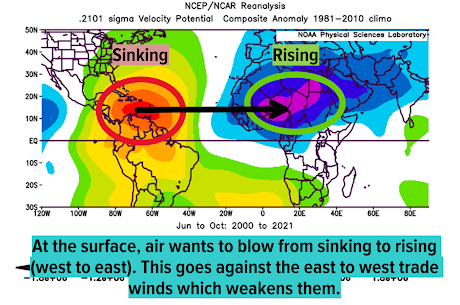 So first, let's quickly go through our global players which will fuel this upcoming hurricane season; the African Standing Wave and the ongoing La Niña. The African Standing Wave is a term we've been using to describe the low frequency rising motion we've seen over Africa for the last couple of decades. This has been paired with a sinking cell centered over the Caribbean, a look that is quite favorable for the Atlantic. It tends to weaken the Atlantic trade winds, warming the ocean. 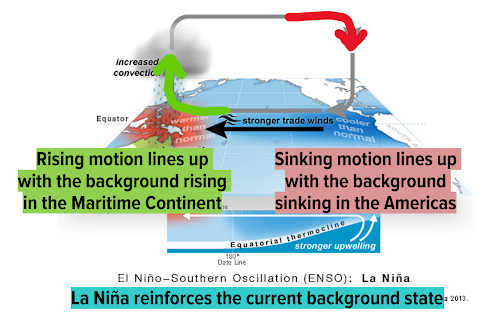 This configuration of rising and sinking motion generally creates a La Niña background state (at least in the Atlantic), so the presence of a La Niña tends to further enhance this. We're now entering our third consecutive year of La Niña conditions, and there is no indication that it will be going away anytime soon. In fact, this is the strongest La Niña we've had in the Spring of any of our recent active years. With the fact that our current La Niña should work to enhance the African Standing Wave, the overall base state is about as favorable as it could be.

Now, let's talk about our sea surface temperature anomalies in the Atlantic. This is something that has varied considerably in past years and has correlated to whether a season is just above average or well into hyperactive territory. What we're looking for here is where the maximum warm anomalies are concentrated; are they directly within the tropics or just outside of it? Years with strong warmth concentrated in the tropics tended to be more active (2017, 2020), and years with maximum anomalies elsewhere tended to be less active (2018, 2019). 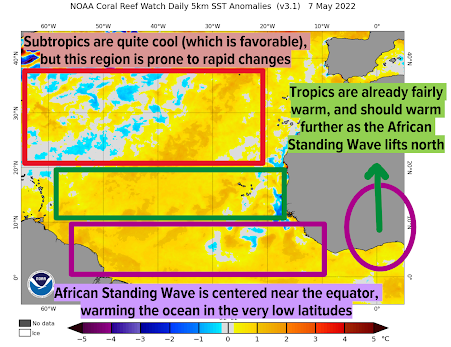 So what's it going to be this year? So many sub-seasonal factors play a role in sea surface temperatures, but on a general scale, I expect a configuration more similar to our very active seasons. This is because the tropical Atlantic is already slightly above average despite the African Standing Wave still being near the equator. As the African Standing Wave lifts northward, the warm anomalies that it has forced should follow it. The subtropics are definitely a wildcard as they are very volatile, but I think the tropics at least should look quite favorable.

I came up with my numbers using all of this information, including the assumptions I made in regards to Atlantic sea surface temperatures. It's still just May and we're months away from peak season, so there's still quite a bit of uncertainty about exactly how active we'll be. Regardless, I feel fairly confident that we'll have an above-average hurricane season. That's all I have for now, and I'll potentially update this in June if major changes arise. Thanks for reading!