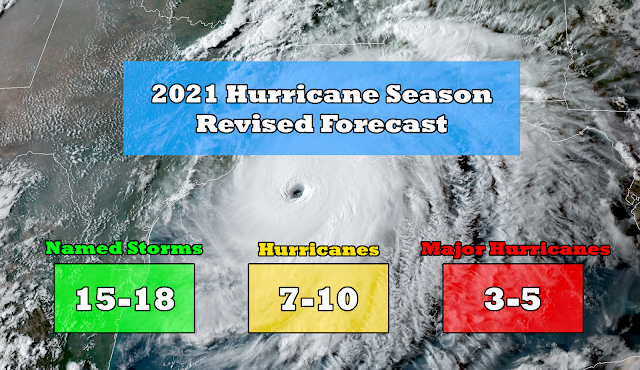 We're a couple weeks into the hurricane season, and parts of the tropics are beginning to wake up. The tropics are rather active close to home, especially for this time of year. We even have an area of interest in the deep tropics, though this area should still remain quiet for the foreseeable future, as peak hurricane season doesn't truly begin until mid/late August. We're much closer to this period than we were when I made my first forecast, however, so some questions that we had then had now been answered. Let's start by discussing the feature that took up a large portion of my previous forecast; the ENSO. 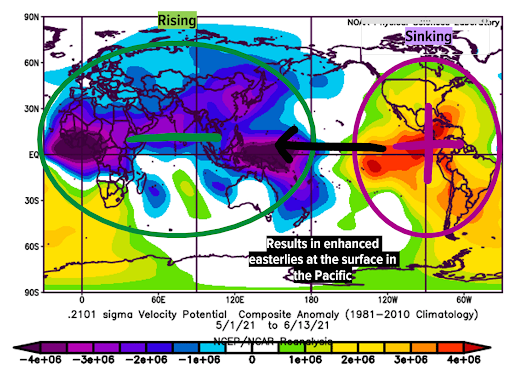 The forecast for the El Niño Southern Oscillation (ENSO) has become much easier, thanks to the fact that we've most passed the Spring unpredictability barrier. As I alluded to in my previous forecast, the development of an El Niño remains highly unlikely, simply because the atmosphere is firmly entrenched in a La Niña forcing pattern. Persistent rising motion is located over Afro-Eurasia, and sinking motion is located over the Americas. A pattern like this supports enhanced trade winds over the equatorial Pacific, which supports the development of La Niña.

Now, it's important to note that we are currently in an ENSO neutral state, not a La Niña. Initially, I assumed that we would likely remain in an ENSO neutral state throughout the hurricane season, as a subsurface warm pool existed in the equatorial Pacific. Recently, however, that warm pool has reached the surface, and a subsurface cold pool has developed in its place. Assuming the La Niña forcing persists, this cold pool could instigate the development of an oceanic La Niña once it eventually reaches the surface. 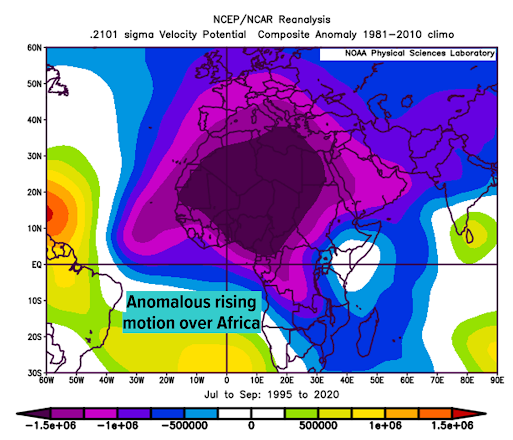 La Niñas tend to bring favorable conditions to the Atlantic, and also help to enforce the African Standing Wave (ASW). The ASW is an area of anomalous rising motion over Africa that initially developed around 1995, and has consistently forced above averaged West African Monsoons (WAM). It's part of the reason why our atmospheric La Niña forcing is so potent, despite the fact that an oceanic La Niña is not currently present. The ASW forces rising over Africa, and when this is coupled with rising over the Indian Ocean (as it is now), it forces sinking to occur over the Americas and the Eastern Pacific.

I know I've been harping on this "La Niña forcing" issue for a while, so I'll wrap it up. La Niña forcing coupled with the ASW usually leads to less shear as warmer SST's over the Atlantic. It also tends to force a stronger WAM, which in turn leads to stronger tropical waves coming off of Africa. These stronger waves have a better chance of developing into tropical cyclones. So while all of this points to an above-average hurricane season, there is a big question that still needs to be answered. That question lies in the Atlantic sea surface temperature (SST) configuration. 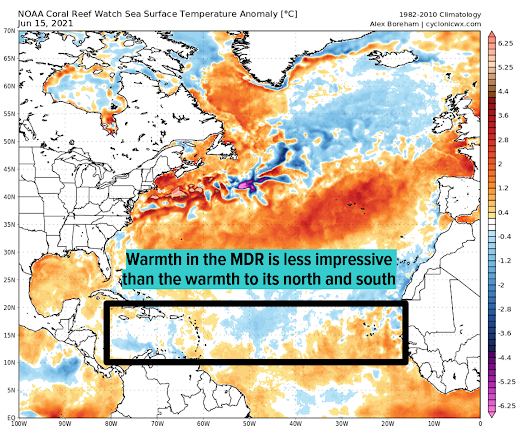 Supposedly, the things I've just described should lead to above-average SSTs in the tropical Atlantic. However, this is far from the case at the moment. SSTs in the tropical Atlantic are near neutral at the moment. In the past few years, the tropics have usually warmed to above average once the ASW lifts far enough north (in early/mid-summer). This year, it's still trapped near the equator. This can be seen in the chart above, as the ICTZ is further south than normal currently.

The well-above-average SSTs in the Gulf of Guinea (what we call an Atlantic Niño) are likely the culprit behind this. The strongest rising motion will be naturally attracted to the area of warmest water, and as long as the Gulf of Guinea is that area, the strongest rising associated with the ASW will likely remain south of the MDR. The Atlantic Niño tends to peak around now and usually weakens throughout the summer and fall. Assuming this occurs, the leash on the ASW should be loosened, allowing it to move north and help weaken the trade winds over the MDR. 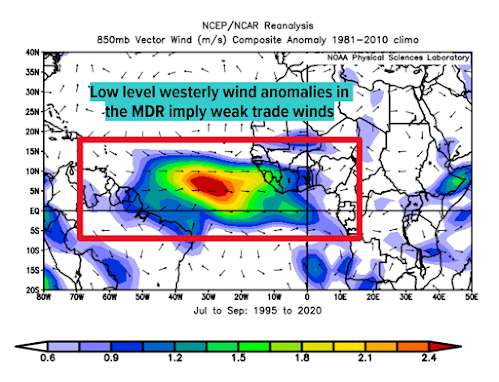 This weakening of the trade winds would likely allow the Main Development Region (MDR to warm above average. Now, I've just made quite a few assumptions here based on climatology, and this is the most uncertain portion of my forecast. If the season ends less active than anticipated, the reason will likely be that the ASW was never able to make it far enough north to warm the MDR. 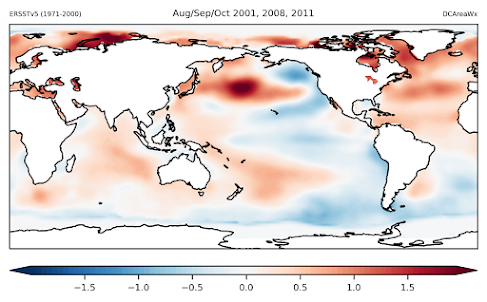 Finally, let's discuss some analogs. While analogs can't be the only things that go into a seasonal forecast, they are helpful to confirm or deny assumptions that have been made. My analog years are 2001, 2008, and 2011, as they match our Atlantic and Pacific SST pattern pretty well, and are all located within the ASW era. In these years, the ENSO cooled, the Atlantic Niño cooled, and the MDR warmed. All of these evolutions fit well with my forecast. The average storm counts for these years also fit well with the numbers that I'm forecasting.

There are other features that can be discussed in regards to the Atlantic hurricane season, such as the North Atlantic Oscillation (NAO) and the subtropical ridge, but these features are prone to intraseasonal variability and aren't worth discussing in a seasonal forecast. I've held my forecast for a solidly above-average hurricane season, thanks to the atmospheric La Niña forcing along with my assumption that the ASW will shift far enough north to warm the MDR. The time to prepare for the hurricane season is now. Thank you for reading!