With the talk of potential winter systems on the horizon, it's time for me to make my annual winter forecast. Last winter wasn't very winterlike, with Washington DC not even picking up an inch of snow. While I'd love to say that this winter looks much more promising, the overall pattern just doesn't look very favorable. In this forecast, I'll first be breaking down my temperature and precipitation maps. I will then give my reasoning behind my forecast. Let's start with the maps. 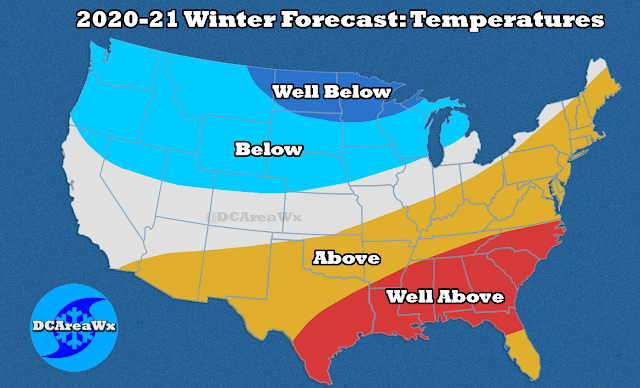 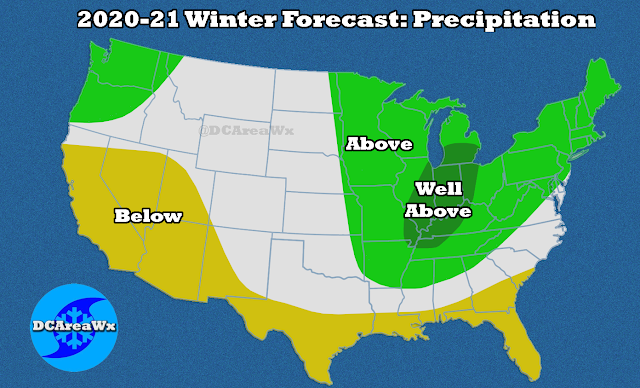 Do not take either of these forecasts as the end all be all, as both (especially precipitation) can be very volatile at times. Small factors that aren't heavily influenced by our larger climate features can lead to major changes to the final outcome. With that being said, let's talk about the main climate features that should affect our winter this year.

As always, we're going to start with the El Niño Southern Oscillation (ENSO). This band of water over the Equatorial Pacific can have major impacts on global weather. This year we're in a moderate to strong La Niña, a big difference from our last couple of winters. The La Niña tends to shut off the subtropical jet stream, which usually leads to a warmer, drier Southern US. The polar jet stream is usually enhanced, however, which leads to a colder Northern US. My forecast closely reflects the average weather in a La Niña, but there are a few differences. 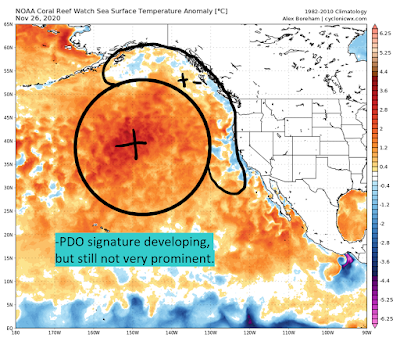 Next, let's talk about the Northern Pacific. In a moderate to strong La Niña, we'd usually be talking about a negative Pacific Decadal Oscillation (PDO). For the past 6 years, however, this entire region has had above-average sea surface temperatures (SST's), and this year is no different. Hints of a -PDO have been appearing at times, however, and I believe that we could transition into one over the next few months. For now, the SST configuration favors troughing over the Western US and Plains, with ridging over the East Coast. 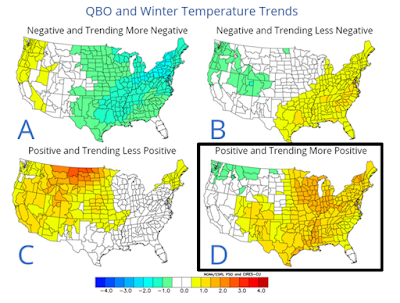 Let's talk about the Quasi-Biennial Oscillation (QBO), a band of winds located over the equator and in the stratosphere. Every 11 months or so, the direction of these winds will flip. We are currently in a westerly QBO which should persist through the winter. While not a ton is known about how the QBO effects mid-latitude weather, a westerly QBO tends to lead to a stronger polar vortex, which usually means milder weather in the continental US.

Although the Arctic Oscillation (AO) and North Atlantic Oscillation (NAO) flip phases frequently, it's still worth talking about them. When these oscillations are positive, we see more troughing over the polar areas, which tends to lead to ridging and mild weather over the continental US. I expect these oscillations to be positive in general this winter, as the westerly QBO and La Niña both favor that to occur. While -AO and -NAO periods will occur, they will likely not occur as frequently.

Finally, let's talk about analogs. I didn't put a ton of weight into my analogs this year, because there just aren't many good ones. The moderate to strong La Niña and warm North Pacific is a very rare combination, and there aren't many analogs that fit the bill. The four analogs I chose were 1949, 1988, 1999, and 2007, as they at least somewhat had this unique pattern. The general idea that they display is that this year should evolve very similarly to a classic La Niña, which fits well with what I have described thus far.

So that's my winter forecast and my logic behind it. Early December is shaping up to be almost opposite of my forecast, but the La Niña should take over as winter wears on. Thanks so much for reading, and feel free to ask me any questions on Twitter @DCAreaWx. Thanks again!