It's been a quiet fall. The end of the hurricane season has been surprisingly inactive, with only a couple of sloppy tropical storms to speak of. There also hasn't been much in the way of early season snow for much of the Northeast, though we have seen a couple of impressive mid-latitude cyclones. Despite all of this, we've reached late November, and it's time to discuss the upcoming winter. I'll begin by briefly discussing my temperature and precipitation forecasts, and then I'll give an explanation of how I came up with them. 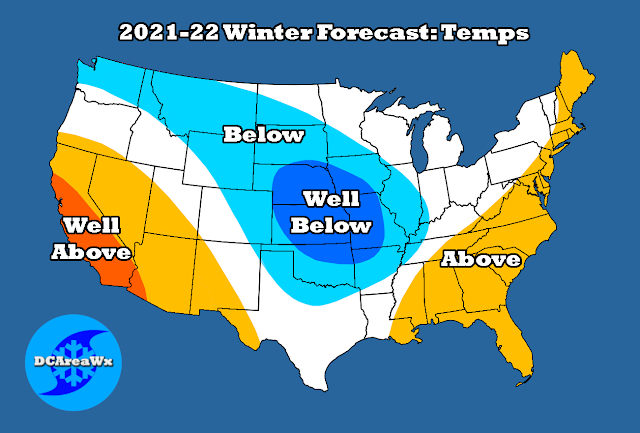 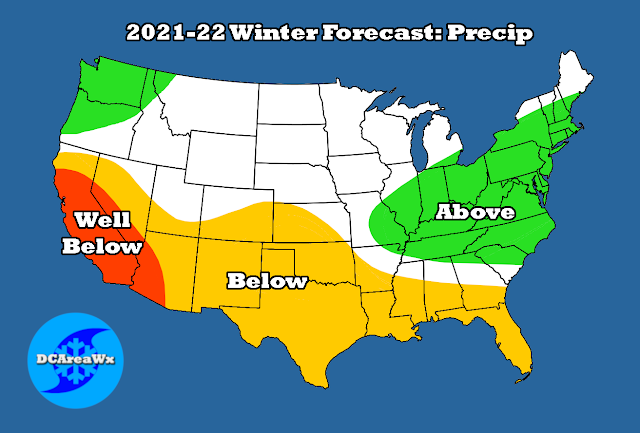 As is always with seasonal forecasts, all of these claims are meant to be very general, and accuracy isn't particularly high. With precipitation forecasts especially, a couple of big storms in a given area could completely invalidate this forecast. With that being said, the rest of this blog post will be dedicated to explaining how I came up with my winter forecast. To achieve this, I'll be looking at various teleconnections and analog years.

Let's start with the El Niño Southern Oscillation (ENSO), a large strip of the Equatorial Pacific that has a major impact on global weather. The ENSO was in a moderate La Niña state throughout last winter but rose into neutral territory during the spring. Since then, it's fallen back into La Niña territory and could cool even further over the next month. This is thanks to a large pool of anomalously cold water that exists just below the surface of the Equatorial Pacific, which has been steadily rising over the past couple of weeks. As it reaches the ocean surface, the La Niña could get just as strong, if not stronger, than it did last year.

So how does a moderate/strong La Niña affect the weather in the United States? The graphic above gives a good breakdown of its various impacts. The Southeast tends to be warmer than average and the Northwest tends to be cooler. The Ohio Valley and Pacific Northwest tend to be wetter, while the Southern US tends to be drier. I've used these anomalies the create the baseline for my temperature and precipitation forecasts. 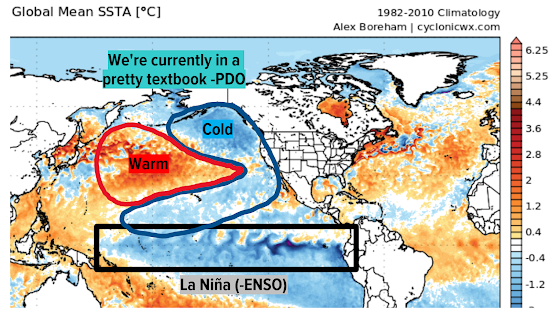 Moving on north, let's discuss the Pacific Decadal Oscillation (PDO), a region of ocean in the Northeast Pacific. We're currently in a -PDO, which can be seen by the cold horseshoe surrounding a warm blob. The ENSO and PDO are closely linked, and when they're in the same phase, they tend to reinforce each other. Because they are both in their negative phase, I expect the PDO to just reinforce the La Niña pattern without having a huge effect of its own.

So what determines if an SSW will occur in a given winter? The Quasi-Biennial Oscillation, a band of winds located above the equator and in the stratosphere, plays a role. Every 14 months or so, these winds reverse direction. We're currently in the easterly phase of the QBO, which should persist throughout the winter. An easterly QBO tends to favor the occurrence of an SSW event during the winter.

Summarizing this fairly lengthy section, our easterly QBO should support an increased likelihood for an SSW event to occur. If one indeed occurs, its effects would eventually transfer down into the troposphere, leading to high-latitude ridging and an amplified jet stream. High latitude ridging displaces troughiness into the mid-latitudes, which increases the frequency of mid-latitude storms. Jet stream amplification allows for bigger storms to develop, producing larger-scale impacts.


It's time to talk analogs, and I actually only have 3. When coming up with analog years, I like to restrict myself to more recent years, as the global climate has changed quite drastically over the past several decades. My analog years are 2007-08, 2011-12, and 2020-21. All of these years had a similar global pattern to the current year (La Niña, -PDO, etc). The big differences arose when looking at high-latitude blocking; 2020 was the only year that had any. Because of this, 2020-21 became my top analog year, though I used all 3 years to make adjustments to my forecast.

I've now gone over all of the key factors that went into my forecast. I initially used the La Niña to create a baseline forecast. I used the -PDO to simply reinforce the La Niña pattern. I then used the stratospheric features (high-latitude blocking, easterly QBO) to make some changes, as they tend to displace cold further south than a classic La Niña has. Finally, I used my small analog set to make some changes to the details of my forecast. This is how I came up with my 2021-22 winter forecast.

If you actually made it to the end of this, thank you so much for reading! As I stated previously, making an accurate winter forecast is very difficult for a variety of reasons, but I do it every year as a way to improve my long-range forecasting skills. Please take all of this with a grain of salt; it's just a generalized forecast that tends to have low accuracy. Again, thank you for reading, and I hope you enjoyed!